We want to make it easier and safer to walk and cycle in Liskeard, which is good for our health and the environment.

We know that communities are healthier where people can easily shop and get to school and work by bike or on foot. We want to give people more choices about how to travel and to help locals and visitors enjoy our town and the surrounding countryside.

The story so far

Early in 2022 Liskeard Town Council successfully bid to the Cornwall Council Town Centre Revitalisation Fund to fund a feasibility study into cycling, walking and bus improvements in Liskeard. The idea was to develop and consult on plans which could then be used to apply for further funding.

After a competitive tender, the cycling charity Sustrans was appointed to carry out the work. Using consultation from workshops with local groups and councillors, public pop-up sessions in town, and online comments from the Community Mapping Tool they have produced a Local Cycling and Walking Infrastructure Plan (LCWIP) which is available here.

After further consultation to prioritise the improvements identified in the LCWIP, Sustrans have undertaken some more detailed work on the priority routes.

The map shows the proposed changes. 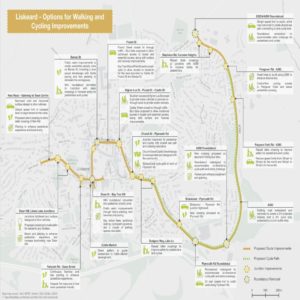 Over the summer there was an online consultation on these designs which closed on 30 September 2022. We also took the consultation to Liskeard Show, and there were other opportunities to talk in person at the Safer Liskeard community drop in sessions at the former Pengelly’s fish shop at the Market Street end of Fore Street where a large copy of the map was available to view at any time in the shop window.

Thank you to everybody who commented. Almost 400 people responded to the online consultation, in addition to the in person comments at the Liskeard Show and at the monthly Safer Liskeard sessions in Fore Street.

More than four in five people supported putting in a separate cycle path and footpath along the side of Charter Way, making this the most popular proposal.  Many people cited safety concerns about the current situation.

Almost two thirds supported introducing two-way cycle paths on Plymouth Road.  A similar number were in favour of new crossings and road narrowing at the junctions of Dean Hill and Limes Lane with Dean Street to make crossing safer, on this busy route to school.

In the centre of town over seven in ten people approved of the idea of increasing the pavement space at the top of Bay Tree Hill, to make a pedestrian focused, attractive area, including seating, bay trees and cycle stands.  This would mean moving a couple of parking spaces. There was also strong support for changing the existing bus stops on the Parade, with over half of respondents opting for relocating the bus interchange, possibly to the Cattle Market, and around a third wanting to see longer bus bays.  These options are currently being investigated further.

At its meeting on 29 November the Town Council voted to support all these recommendations which had gained local support.

Over four in five people wanted to see an extension to the current 20mph limit in the central shopping streets.  There was less certainty about introducing a 20mph zone which covered most or all of Liskeard with just under a half supporting it and four in ten opposed.  The Town Council will now develop more detailed plans on this and undertake further consultation.

Two of the proposals were not supported by the public.  One was closing Castle Street to through traffic, restricting access to buses and local residents only.  Over half were against this with over a third in favour.  The other was creating a pedestrian priority zone in Barras Street, including removing the mini roundabouts.  Around four in ten people were for and against this with slightly more opposed.  The Town Council agreed not to proceed with either of these measures at the moment but to keep the situation under review as circumstances changed and in light of the impact of the other changes once they are implemented.

The plans have been developed in conjunction with the Looe Valley Trails project, who will also be bringing forward proposed improvements to areas such as New Road, as part of the Liskeard loop.

The Town Council will now work with Cornwall Council to find opportunities to apply for grant money to make the changes.  There are a number of possibilities related to levelling up funds and active travel, plus contributions from recent and future housing and commercial developments.

Mayor of Liskeard Simon Cassidy said, “I’d like to thank all the local people who contributed to the development of the plans and everyone who responded to the consultation.  We have listened to what you have said and revised the plans accordingly.”

Town Councillor Rachel Brooks, who chairs the Active Travel Working Group said, “We know that communities are healthier where people can easily shop and get to school and work by bike or on foot. Having these well developed plans and evidence of public support puts us in a really good position to apply for the significant grant money we’ll need to make them a reality.”

We are working closely with the Looe Valley Trails project, which includes a Liskeard loop for a multi-use trail, and you can read more about their plans here

This website uses cookies to improve your experience while you navigate through the website. Out of these, the cookies that are categorized as necessary are stored on your browser as they are essential for the working of basic functionalities of the website. We also use third-party cookies that help us analyze and understand how you use this website. These cookies will be stored in your browser only with your consent. You also have the option to opt-out of these cookies. But opting out of some of these cookies may affect your browsing experience.
Necessary Always Enabled
Necessary cookies are absolutely essential for the website to function properly. This category only includes cookies that ensures basic functionalities and security features of the website. These cookies do not store any personal information.
Non-necessary
Any cookies that may not be particularly necessary for the website to function and is used specifically to collect user personal data via analytics, ads, other embedded contents are termed as non-necessary cookies. It is mandatory to procure user consent prior to running these cookies on your website.
SAVE & ACCEPT